Golf Game Management – How to Get Better at Golf

The Mental Game – How to Get Better at Golf

Golfers since the early mid 1400’s have one objective in mind in golf, how to get better at golf. Since the days when shepherds used staffs to hit stones into rabbit holes on the links, golfers started developing a strategy to improve their game.

The terrain between the sea and land was known as the links, and this sport has evolved from these humble beginnings. Most of these evolution and improvements came from technological developments in clubs and later in golf balls. One area that had the biggest impact on golf was in Sport Psychology, the mental game of golf, of how to mentally play this fascinating game we call golf. The golfer can own the best equipment with cutting-edge technology that money can buy and still be at a disadvantage and the mercy of the golf course.

This was proven with an interview I did with a Vietnam P.O.W. held at the Hanoi Hilton, a North Vietnam prison, who played his home course in his head every day in his seven-by-seven foot cell. See more details at the end of this article on: Colonel George Hall.

One factor the golfer needs to understand on how to get better at golf is to have a coaching mentality, or game management. Management occurs in the area between the ears, as described by Bobby Jones, Sr. If the golfer wants to improve their game and handicap, golf management is a great area to start. Everyone has an equal opportunity in this region between the ears to either improve or settle for less seeing little to no improvement.

“Golf is a game that is played on a five-inch course – the distance between your ears.”  Bobby Jones Sr.

The Golfer Has to Learn be Their Own Coach

Golf is an equal opportunity for everyone to realize one’s potentials or experience its humbling nature. The golfer will quickly learn while on the course, the golfer has to learn to be their own swing coach, trainer, and sport psychologist all wrap into one person. Game management, or the Coaching Factor, is the single best method to be able to utilize these strengths and improve your golf game. Nick Faldo made the comment during a golf tournament about the Coaching Factor in that, “The golfer has to be their own coach on the course.”

“The golfer has to be their own coach on the course.”

This was the very reason that I decided to include the term Coach in the title of my book, The ESPY Golf Swing Coach. The Coaching Factor has such a direct impact on how well the golfer does on the course that it became a centerpiece in my book. In golf, the golfer is the coach on the course to control the immense power the golfer has, which is their mind, specifically their subconscious mind.

It is important to break down the responsibility of the mind into two distinct activities. The mind has two functions in golf; one is The Focus Factor, the conscious, WHAT to focus on, and other is The Power Factor, the subconscious, HOW to execute the golf swing. The Focus Factor is game management. The Power Factor consists of the techniques and mechanics, or the ability to play the shot with the subconscious mind using existing fine and gross motor skills.

In talking about the role of The Coaching Factor, there’s probably not a better coach in football than Coach Bear Bryant of Alabama. A close second and third are Coach Nick Saban, and Gene Stallings both coached at Alabama. Coach Bear Bryant had a quote about what it takes to be a coach. Just replace the term coach and football with the term golf, and you will have a great philosophy to apply in golf management. The direct quote is:

“If you want to coach you have three rules to follow to win. One, surround yourself with people who can’t live without football. I’ve had a lot of them. Two, be able to recognize winners. They come in all forms. And, three, have a plan for everything. A plan for practice, a plan for the game. A plan for being ahead, and a plan for being behind 20-0 at half, with your quarterback hurt and the phones dead, with it raining cats and dogs and no rain gear because the equipment man left it at home.”

“If you want to be a better golfer, you have three rules to follow to win at game management. One, have a burning passion where you can’t live without golf. Two, be able to recognize winning strategies. Strategies come in all forms, like football, baseball, or even boxing techniques. And three, have a plan for everything. A plan for practice, a plan for the game. A plan for being ahead, and a plan for being behind by 5 strokes at the turn. And all this while trying to find sense of your golf game with it raining and no dry grips in the bag.”

I believe Steely Dan song about winners in the World said it best in the song Deacon Blues:

They got a name for the winners in the world, I want a name when I lose.
They call Alabama the Crimson Tide, Call me Deacon Blues 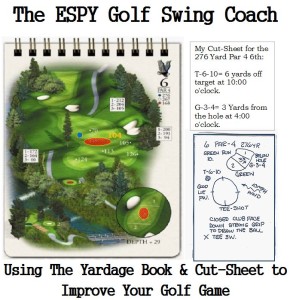 The Cut-Sheet used for Golf Management

Just as coaches draw out plays to execute during practice/play, a great strategy for the golfer to use is a cut-sheet, or what I call The Paper Chase. This can be drawn from a yardage book or Google Maps before the round. The golfer can draw each par four or five hole out on two-11 x 8.5 paper, folded in half twice. Use one side of the sheet for the front and the other side for the back nine. These two folded sheets of paper can fit in with the golfer’s scorecard during play.

While the golfer is drawing each hole, the golfer can mentally play the hole as if they are on the golf course. For more information, link to my article: IMPROVING YOUR MENTAL PREP WORK WITH A GOLFER’S CUT-SHEET.

While I was in the research stage of my book, I was in Hattiesburg, MS, about 80 miles south from where I live. While at the Country Club, I met a Vietnam P.O.W., Col. George Robert Hall, who spent seven-and-a-half years at the infamous Hanoi Hilton in North Vietnam. Colonel George Robert Hall survived his captivity with his love for golf. Col. Hall played his home course and Pebble Beach every day in his mind. Six weeks after his release in February of 1973, he played in the New Orleans P.O.W. Pro-Am Open, where he shot his handicap of four (4). During my interview with Col. Hall, he credited his amazing performance with playing each shot of each hole in his mind during his captivity. 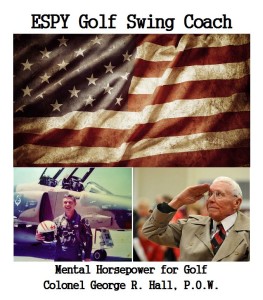 In the weeks following his release, he drew each hole of his Hattiesburg golf course in preparing to play for the first time. On paper or a cut-sheet, Col. Hall walked himself around each hole as he played each shot on paper, The Paper Chase. For his story and my interview with Col. Hall, please link to my article: 1973 GREATER NEW ORLEANS PRO-AM OPEN INVITATIONAL– HONORING OUR HEROES, A TRUE AMERICAN STORY! http://goo.gl/24lFvo.

This story was an impressive achievement for a golfer of any level, much less a golfer that spent seven-and-a-half years serving as a P.O.W. at the Hanoi Hilton in North Vietnam. His story deserves to be told about being a great American and How he used his love of golf to survive his capture.

For more information on how to Get Better at Golf by improving your game management, please purchase your copy of The ESPY Golf Swing Coach: 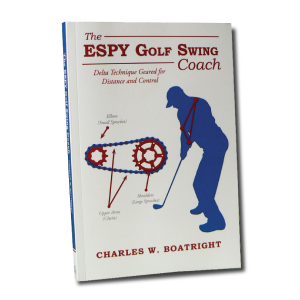 While you are visiting my Online Store, please look over the apparel and other items I have in my Online store. I’m an Authorized US WINGS Dealer that features the classic A-2 Leather Jacket that you can have personalized. I show my leather jacket below as an example of the personalization you can have done. Also don’t miss the tailored Chino Khaki pants you wear on the golf course. 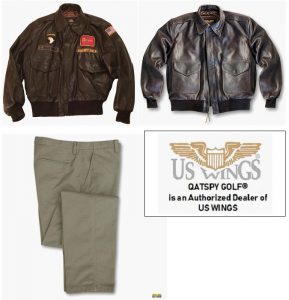