NEW! The United States Space Force 3.50- inch Diameter Patch (ONLY) with Navy Blue background with Velcro backing that can be attached on to United States Military uniforms, or can be sewn onto hats, shirts, jackets, or even bags to show your support for the newest branch of the U.S. Military.

Hook side for Hook & Loop Velcro.

This patch can either be attached to a Velcro surface or sewn-on to your apparel item.

The UNITED STATES SPACE FORCE 3.50- inch Diameter patch with Velcro on the backside in order to attach to military uniforms Velcro surface or that can be sewn onto hats, shirts, jackets, or other baggage or duffle bag.

The SPACE FORCE is under the Department of the AIR FORCE that was created by President Donald J. Trump on December 20, 2019. This is the sixth military branch created to defend and secure use of space.

Hook side for Hook & Loop Velcro that the United States Military can use on their uniform. 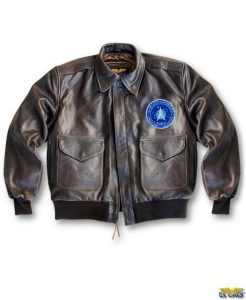 To show your support for both the U.S. Military and The United States Space Force, especially bikers, and pilots, purchase one of our US WINGS® A-2 Leather Flight Jackets or a Motorcycle Jacket and have United States Space Force Patch sewn on by our professional craftsmen at US WINGS® for a minimum fee, including the cost of either of these jackets, either on the right or front flap of our Leather Jackets. Nothing can make a better statement than our A-2 Leather Flight Jackets or Motorcycle Jackets, anywhere you travel. This will show your support for our Militar,y the greatest fighting force in the world or in space.