US WINGS® has gone Retro and got the exact pattern and started manufacturing the authentic U.S. ARMY Military Spec A-2 Cowhide Leather. This meets all Military Spec for the A-2 Jacket that either your father or grandfather might have worn during World War II, 75 years ago.

Starting in April of 2020, the U.S. ARMY will issue the authentic World War II A-2 Leather Flight Jacket to its recruiters, but you can pre-order your NOW to be delivered this December.

This is the exact Military Spec A-2 Leather Flight Jacket that pilots, aircrews, and even the paratroopers in the 82nd and 101st Airborne proudly wore during WW-2. The A-2 Flight Jacket was issued to the U.S. ARMY that at that time included the U.S. ARMY Air Corps that in 1947 became the U.S. Air Force. 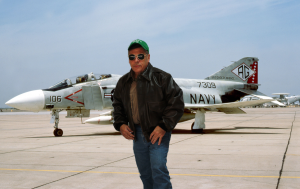 This is me featured with the current A-2 US WINGS Cape Buffalo Leather Flight Jacket that THE QATSPY Apparel Offers also. I’m pictured with a F-4 Phantom, Vietnam Era Fighter.

Fast-forward to 2020: For the first time in more than seven decades, the A-2 “Bomber” Jacket will make its triumphant return to active duty to the US Army and will become an officially issued jacket once again! For authorized personnel, the A-2 will be an option to go along with the Army’s new WWII-styled service uniforms, which will roll out to all soldiers beginning in 2020. US Wings, who is already an official supplier to the US Military, will also be one of the suppliers of this jacket to the US Army.

But you can get the very same A-2 jacket as US Army personnel without having to join the military! Our USA-made Official US Army A-2 is the same jacket that will be issued to the US Army in 2020. The A-2 has been a perennial favorite among our customers for years and this newest rendition will no doubt prove to be just as popular. It’s made from the finest mil-spec cowhide available and is manufactured to the highest military quality standards and specifications. Based primarily on the current-issue USAF goatskin version (but with a few small differences like slightly more narrow, tapered epaulets)

The Authentic Army Cowhide A-2 Leather Jacket (US Made) features:

This jacket will be issued to Army personnel starting in April of 2020, but we will have it in-stock in December 2019, so pre-order yours today and get it before Christmas!

The A-2 had a glorious history with the USAAF and is still proudly worn by USAF personnel today and has been the most popular “bomber-style” jacket among civilians for decades. Now, current US Army personnel will have the opportunity to create their own glorious history with this venerable & iconic jacket and so will you: get one today and experience the “real deal” for yourself! Made in the USA.